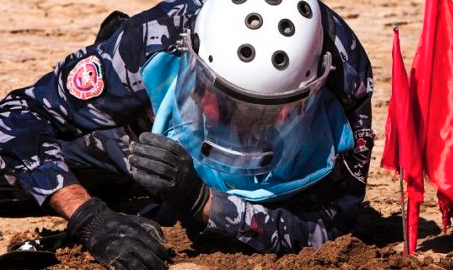 How does the Convention address improvised anti-personnel mines?

While the Convention does not define the term ‘munition’, relevant military doctrine, for example, requires that the device be complete, but does not specify how the device is to be constructed. A device is complete when it contains all the components necessary for its function, irrespective of it being manufactured or improvised.

The requirement that an anti-personnel mine be exploded ‘by the presence, proximity, or contact of a person’ is, for instance, fulfilled where the mine is detonated by the pressure of an ordinary footfall, or the triggering of a tripwire. In exceptional cases it could even be detonated by the presence or proximity of body heat. This element of the definition therefore only describes the acts that trigger the explosion, but does not address the technical features of the components of a mine or how it is constructed. Consequently, it is irrelevant whether the mine was manufactured or improvised, as long as the explosion is triggered by a person.

Finally, the preamble states that the object and purpose of the Convention is to put an end to the suffering and casualties caused by anti-personnel mines, and to give effect to the prohibition of attacks employing a weapon that cannot be directed at a specific military objective. Improvised anti-personnel mines are as incapable of distinguishing between civilians and combatants as their manufactured counterparts. This raises the same concerns as those at the heart of the Convention, and must therefore be addressed in the same manner as manufactured anti-personnel mines.

Which IEDs fall within the scope of the Convention?

The breadth of the term ‘IED’

There is no universally accepted definition of IEDs. Definitions of the term adopted by some States and organisations, albeit mostly distinct, are broad and cover many different types of IEDs as improvised weapons. These include anti-personnel and anti-vehicle mines of an improvised nature; roadside bombs; body-borne or vehicle-borne IEDs used in suicide attacks; shoulder-fired recoilless rocket launchers; improvised claymore mines; and improvised mortars and rockets.

There is only one international treaty that refers specifically to IEDs. Amended Protocol II to the Convention on Certain Conventional Weapons (‘amended Protocol II’), Article 2(5), defines the term ‘other devices’ as ‘manually-emplaced munitions and devices including improvised explosive devices designed to kill, injure or damage and which are activated manually, by remote control or automatically after a lapse of time’.

However, current discussions in the framework of amended Protocol II on IEDs are not restricted only to those constituting ‘other devices’ within the meaning of Article 2(5). Rather, they are focusing more broadly on the use in current conflicts of improvised (as opposed to industrially manufactured) explosive devices that are either command or remotely detonated, with time delay fusing or activated by a vehicle or a person. The latter can be anti-personnel mines.

In brief, as illustrated in a non-exhaustive manner in the figure below, the term ‘IED’ has been used to label a wide variety of weapons manufactured outside industrial standards, including improvised anti-personnel mines. The legality of the use of IEDs must be assessed on a case-by-case basis. Such assessments will depend on how these improvised weapons are designed, how the parties are using them and the environment in which they are used. In any case, the lawfulness of use in armed conflict of IEDs depends, amongst other norms as applicable, on the compliance with principles of international humanitarian law, in particular those of distinction, proportionality and precautions in attack.

The principle of distinction requires that parties to a conflict at all times distinguish between civilians and combatants and between civilian objects and military objectives, and that they direct their operations only along military objectives. The principle of proportionality prohibits attacks which may be expected to cause incidental loss of civilian life, injury to civilians, damage to civilian objects, or a combination thereof, which would be excessive in relation to the concrete and direct military advantage anticipated. Finally, parties to a conflict are obligated to take all feasible precautions under the principle of precautions in attacks. This requires that constant care be taken to spare the civilian population, individual civilians and civilian objects in the conduct of military operations.

IEDs constituting anti-personnel mines within the meaning of the Convention

IEDs fall within the scope of the Convention if and when they constitute anti-personnel mines as per the definition in Article 2(1), i.e. a mine designed to be detonated by the presence, proximity or contact of a person. The ICRC, through its field operations in a number of contexts, has encountered IEDs that fit the definition of anti-personnel mines in the Convention. Such devices were placed under, on or close to the ground or surface area, and equipped with trigger mechanisms also commonly used in manufactured mines, including but not limited to pressure plates [4]; trip wires [5]; crush wires [6] ; and pull-switches [7]. They explode upon contact with or initiation by a person, such as the application or release of pressure exerted by body weight, or in the person’s proximity or presence through passive infrared sensors. For example, it has been reported that pressure-plate IEDs are often activated by 10 kilograms of pressure, the weight of a young child. Furthermore, the ICRC is aware of the use of IEDs with pressure plates placed directly beside the main charges causing maximum damage to the person activating it.

The ICRC, as well as many others, has witnessed the serious humanitarian consequences of improvised anti-personnel mines. These mines are, in the ICRC’s experience, often artisanal or home constructed or adapted, and everyday items such as nail polish and fuel have been used as explosives. The widespread availability of components enabling the construction of improvised anti-personnel mines contributes not only to their growing use in recent and current armed conflicts, but also, more critically, to the rising numbers of civilian casualties in many contexts. Examples include Afghanistan, Iraq, Syria, Mali, Colombia and the Philippines, among others.

As they remain undetected or become displaced over time, for example through natural disasters such as floods, improvised anti-personnel mines continue to affect local populations long after hostilities have ceased. Not only do they continue to kill and maim civilians, but they also often cause long-term socio-economic consequences for local populations, preventing them from returning to their homes, impeding the growing of crops in contaminated fields, and inhibiting the delivery of humanitarian assistance. Finally, their construction outside of industrial standards further complicates clearance operations, thus exacerbating the risk to humanitarian organizations working on the ground including demining operators.

IEDs not falling within the scope of the Convention

The lack of a universally accepted definition and the breadth of the term ‘IED’ have led to uncertainty among some stakeholders regarding the application of the Convention to such devices. Where designed to be detonated by the presence, proximity or contact of a person, and capable of incapacitating, injuring or killing one or more persons, IEDs constitute anti-personnel mines and therefore fall within the scope of the Convention. The explicit use of the term ‘anti-personnel mine of an improvised nature’ instead of ‘IED’ for the purpose of the Convention can further enhance clarity for States Parties and facilitate the fulfilment of their treaty obligations.

[1] The ICRC has submitted a working paper entitled “Views and Recommendations on Improvised Explosive Devices Falling Within the Scope of the Anti-Personnel Mine Ban Convention”, discussing this issue with a view to the Fourth Review Conference of the Convention, taking place 25-29 November 2019.

[2] See S. Maslen, The Convention on the Prohibition of the Use, Stockpiling, Production and Transfer of Anti-Personnel Mines and on their Destruction, Oxford University Press, 2004, p. 118.

[4] Pressure plates may function via pressure or pressure release, that is a method for activating the device that occurs as a result of either application or reduction of pressure. UN Mine Action Service (UNMAS), IED Lexicon, United Nations, undated, p. 25.

[5] Trip wires include, for example, grenades to which a wire is attached such that when the wire is snapped by the movement of a person, the pin is removed and the grenade detonates: Maslen, p. 118.

[6] A crush wire consists of contact point(s) spanning a length of wire that functions as an IED when crushed. UNMAS, p. 24.

[7] A pull-switch functions when a person applies tension to a firing mechanism – such as pulling a spring. The tension causes an action that releases a firing pin or activates an electrical or electronic switch. UNMAS, p. 25.